skip to main | skip to sidebar

'There I go falling in love again' by Chiquita Green 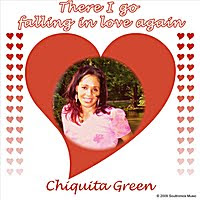 This wondedrful new song has now been released in its own right and available on CD Baby, Amazon and iTunes.
Internationally acclaimed, Chiquita Green has travelled the world as a professional vocalist and songwriter for over twenty years and has appeared at venues such as The Half Note Jazz Club in Athens, The Q Jazz Club in Istanbul and The Vienne Jazz Festival in France. In addition Chiquita is also a successful vocal arranger, percussionist and producer in her own right and has worked on numerous projects with the likes of Deniece Williams, Russell Thompkins Jr, Ted Mills, Jean Carne and Stevie Wonder. Her vocal production skills and expertise are clearly audible on this fabulous recording celebrated here today. Constantly in the studio exploring her many talents with the soul, jazz and gospel productions she is involved with, she never fails to uplift the session to another level of creativity. For a spiritual journey of some of her best works check out her CD albums ‘The Sandmouth – Mercy Project’ and ‘Let’s Go’, the latter winning her two ESMA Gospel Awards in 2006 for best urban soul album and best Jazz performance.
The music and vocals on ‘There I go falling in love again’ were all recorded at Bobby Eli’s legendary ‘Studio E’ in Philadelphia, where writer/producer Bobby Eli, vocalist/writer Chiquita Green and writer Carl Dixon crafted this terrific new Philly classic. The rhythm section included some of Philadelphia’s renowned session musicians including those who performed with the legendary ‘MFSB’ and ‘Salsoul Orchestra’ like Bobby Eli, Dennis Harris, Jimmy Williams, T Conway, Earl Young and Rikki Hicks.
Track listing
1) There I go falling in love again by Chiquita Green 3’42”
2) There I go falling in love again (instrumental version) 3’42”
Written by:Bobby Eli/Chiquita Green/Carl Dixon(Soultronics Music/BMI, PRS)
© 2009
Produced, recorded and mixed by:Bobby Eli at Studio E Recording, Upper Darby, PA, USA.
Musician acknowledgments:
Drums – Earl Young
Bass guitar – Jimmy Williams
Keyboards - T Conway/Bobby Eli
Guitars – Bobby Eli/Dennis Harris
Percussion – Rikki Hicks
Additional backing vocals:
Chiquita Green
Janice McClain
Executive Producer:Carl Dixon
© 2009 Soultronics MusicAll Rights Reserved

Posted by Soultronics at 08:08 No comments:

They’re back - ‘Double Exposure’. A brand new song with thought provoking lyrics and great harmonies as this fresh Philly production will attest. Times have changed and the group are vocal about today’s recession. Which recession, there is more than one?

‘Soul Recession’ is a brand new recording by legendary Philly group ‘Double Exposure’ who are renowned for their terrific harmonies and celebrated releases on Salsoul Records. Including disco’s very first official 12” record ‘Ten Percent’, they also cut songs like ‘My love is free’ and ‘Everyman’ which remain popular today by still being played in clubs and on radio stations around the world.

‘Double Exposure’ are James Williams, Joseph Harris, Charles Whittington and Leonard ‘Butch’ Davis who were originally called ‘United Image’ back in the 1960’s. They have been singing together since junior high school and have remained friends ever since. The opportunity to record ‘Soul Recession’ was presented to them recently by legendary Philly producer, writer and musician, Bobby Eli; their cumulative magic can be heard on these terrific new productions.

Backed by some of Philadelphia’s finest and renowned session musicians including some original members of MFSB like Earl Young, Bobby Eli, Dennis Harris, Jimmy Williams, T Conway, and Rikki Hicks, the track scrutinizes today’s recession implications with a soulful upbeat performance just made for the dance floor. The rhythm, music and vocals were all recorded at Bobby Eli’s legendary ‘Studio E’ in Philadelphia, where writer/producer Bobby Eli, writers Chiquita Green and Carl Dixon, the musicians and ‘Double Exposure’ bounced ideas off one another to create this classic piece of new Philly soul.

In addition to the Bobby Eli mix of ‘Soul Recession’, we include two very special mixes created by music industry gurus John Morales and Tom Moulton. Their pedigrees go back many years as both pioneered early mixing techniques for dance records to extraordinary levels and are still extremely creative with their productions today. Their exceptional contribution to dance music is historic and we can now share and enjoy their enthusiasm again with these distinctive renditions of ‘Soul Recession’. Also included is the ‘announcer’ version of the song featuring Philly personality Jerry Wells who introduces the track with a bespoke news statement just for fun! Being an early incarnation of the song and created the same week the rhythm tracks were recorded in the studio, we felt its inclusion on this selection important. In addition, check out the rather unusual and clever “Ali Baba’s ‘Watcha Gonna Do’ mix”.

We would also like to introduce our very special guest Chiquita Green who performs as the featured artist on bonus track ‘There I go falling in love again’. Internationally acclaimed Chiquita has travelled the world as a professional vocalist and songwriter for over twenty years and has worked on numerous projects with the likes of Patti LaBelle, Deniece Williams, Russell Thompkins Jr, Ted Mills, Jean Carne and Stevie Wonder. Her vocal production skills and expertise are clearly audible on all the recordings celebrated here today.

So take heed, listen please; ‘Double Exposure’ are back!

Radio 'voice over' on announcer version by:
Jerry Wells

Chiquita Green & 'There I go falling in love again'

PURCHASE 'THERE I GO FALLING IN LOVE AGAIN' HERE!

Listen to the full version of 'There I go falling in love again' by the talented Chiquita Green.

Soultronics
'Soultronics' is a brand new label that showcases the immense wealth of writing, producing and performing talent in Philadelphia, but with a unique London connection. Our very first releases are celebrated here with the Bobby Eli mix of the new 'Double Exposure' track called 'Soul Recession', and in addition also features bonus track 'There I go falling in love again' by Chiquita Green. Both these brand new compositions originated in Bobby Eli's 'Studio E', in Philadelphia and were written by Bobby, Carl Dixon and Chiquita Green.